Right to Life of Central California is the tenant of the Outreach Center located at 616 N Fulton St, Fresno, CA 93728. It is located immediately next door to Planned Parenthood’s main Fresno abortion clinic. Our outreach center the base of operations for our incredible sidewalk advocacy work, as well as the headquarters for our volunteer efforts and 40 Days for Life campaigns.

Linda Teliha, our outreach coordinator, talks with women and couples going in and out of Planned Parenthood to encourage them to choose life. In 2021, several of these young women changed their minds about abortion, and decided to keep their precious babies! You can find their stories below and support their life affirming choice. 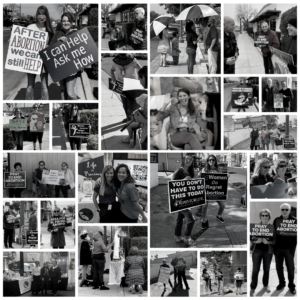 We look forward to a new year and continuing our work of changing minds and touching hearts! 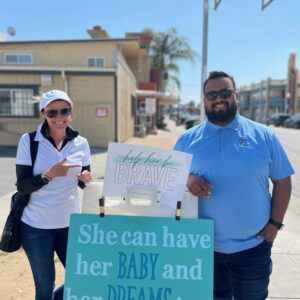 This baby brought so much joy to the outreach center. What a special day! Thank you to the Knights of Columbus from Saint Anthony of Padua Catholic Church, Council # 6092, for raising a $1,200 scholarship for baby!! And thank you to the special group who came to the party. Special thanks to our outreach team for making this party happen. Thank you to everyone who supports our organization! Last but not least, thank you Mama for being part of our RTL family… We love you!

Here are the stories of the smart, brave, loving young women who have chosen Life and where you can support them:

Tonya: Tonya is an 18-year-old young woman who met Right to Life staff outside of Planned Parenthood, where she was considering having an abortion. She didn’t want to have an abortion, and only came to Planned Parenthood because she thought she was too young, and she needed answers and options. After speaking with our staff and receiving encouragement, she decided to keep her baby! She is a lovely and bright young woman, and she is in love with her baby, due in September.

Chase: Chase is a young woman who had one child, but who came to Planned Parenthood during her second trimester for an abortion of a child she had not planned. In fact, when our employees talked to her, Chase had already been dilated the day before, as preparation for a surgical abortion. Her mind changed when she encountered our employees, Linda and Monica, who let her know that she wasn’t alone, and that life after an unplanned pregnancy was both possible and incredibly joyful. She went in to Planned Parenthood, and told them she was not going through with the abortion. She openly shared her story with us in hopes of offering support to other women facing the same fears. She is expecting a son, whom she has named Elias Jay.

Leyla: Leyla is married, a young mother with two young children under the age of 2. Her husband works in San Francisco while she lives in Fresno. She entered Planned Parenthood stressed, isolated, and facing financial hardship. She didn’t want an abortion, but she felt she did not have an adequate support system to help her with another baby. After speaking with our staff, she came to realize how she genuinely wanted to keep her baby, but was mostly just in need of support and friendship. She returned to introduce our staff to her two children, and has expressed her deep and sincere joy and gratitude for our staff’s role in helping her choose life for her baby.

Every spring and fall, Right to Life of Central California hosts Fresno's 40 Days for Life, an international campaign of prayer and presence to those who are considering or who have experienced abortion. Every year, hundreds of volunteers from throughout the Valley join us to pray outside of Planned Parenthood for an end to abortion. Our outreach center gives our supporters a place to park, to use restroom facilities, to shelter from rain or heat, as well as a space to grab a snack, a cup of coffee, or even to pray silently indoors. This year's Spring Campaign is the following dates:
Fall 2022